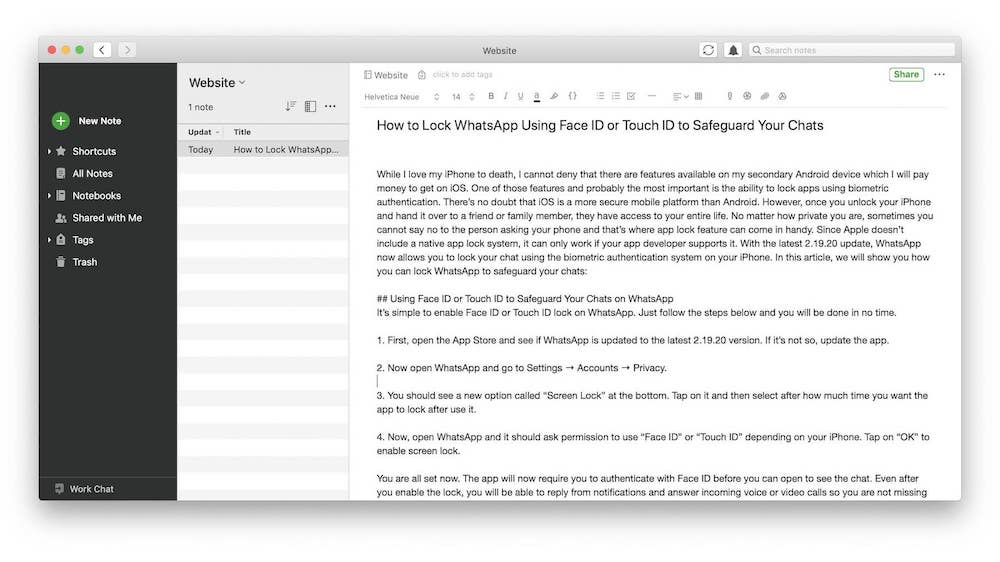 Dark Mode on macOS Mojave works like a charm. The entire macOS user interface along with all the stock apps adhere to the dark mode guidelines when you turn it on. It is the best implementation of the dark mode on any operating system, period. As time passes, it becomes even better as more and more third-party apps are supporting the dark mode. Apps like Things 3, Fantastical 2, Ulysses, Bear, Evernote, and more support dark mode natively. You turn on the dark mode and all the supported third-party apps use dark interface.

Here lies a big problem that Apple did not expect. Making the dark mode a system-wide command, it took all the power from users’ hands. There are certain applications which look better and are more user-friendly when used in light mode. Since the dark mode is a system-wide command, it turns even those apps to adhere to dark mode guidelines which many users including don’t like. Some third-party apps allow you to disable dark mode. Things 3 is one of them and I use it only in light mode. Unfortunately, some of them don’t and Evernote is one.

The dark mode on Evernote doesn’t feel natural, and it makes it hard to read the notes. I hate it and I assume that many of you feel the same. In this article, I will show you how you can turn off dark mode only in Evernote on macOS Mojave.

Turn Off Dark Mode in Evernote on macOS Mojave

Evernote natively allows you to disable dark mode for its notes. If that’s enough, you can turn off dark mode for notes. Launch the Evernote app, go to Preferences (⌘,) → General. Enable the “Use Light Mode for notes in Dark Mode”. I hate it even more than the normal dark mode.

A few days back in our new series of articles dubbed as Mac Weekly, I shared a free Mac utility called NightOwl which allows you to whitelist apps you want to use in light mode even when using dark mode on macOS Mojave. You should check it out as it works with all the system apps and most of the third-party apps. It is an easy way to use multiple apps in light mode. For some reason, Evernote doesn’t appear on its list of app.

Update: After a few times of quitting and opening Evernote it is showing in NightOwl’s whitelist. You can enjoy the light mode on Evernote without using the Terminal scripts method. If Evernote or any other third-party app is not showing in your NightOwl whitelist make sure to quit and relaunch the app until it shows.

The only option that remains is to use a Terminal command. Don’t be scared if you never used Terminal before. It is a one-line command and it is reversible. There are two commands mentioned below. The first one turns off the dark mode and the second one turns it back on.

Launch the Terminal app. Copy and paste the first command in the Terminal window and hit enter/return. Close the Terminal app and quit Evernote. Remember, don’t close Evernote, quit the app (⌘Q). Relaunch the app and it will run in light mode. If you want to go back, repeat the process using the second line of command.

Apple should correct its mistake and give users more control over the dark mode. Till that happens, users will rely on third-party solutions. NightOwl is a good free utility which is best for managing dark mode on macOS Mojave. You should download and configure it. If there are any apps which you want to use in light mode and NightOwl doesn’t support them, let me know in the comments section below and I will try to help you out.